SPOILERS HEREIN THERE ARE!
WARNED YOU HAVE BEEN!

Welcome to “The Day Reagan Was Shot” – an episode many of us who create the series think is one of the best ones we’ve ever made!

It all comes from the page.  Arika Lisanne Mittman, who been on TIMELESS from the beginning and serves as one of executive producers breaking stories and running the writer’s room – teamed up on the script with newcomer Lauren Greer.  Lauren has been serving as the writer’s room assistant and knows everything about the ins and outs of the TIMELESS' big picture.  This (I think) is her first produced script.
There are so many themes and stories and big ideas at play in this one – we learn so much about so many of our team, both about their history and their character.  Jiya gets to go back in time for the first time ever and gets a great 80’s hairdo in the process!  Rufus and Wyatt have a big moral struggle as they realize that even a Rittenhouse agent can have humanity and may be here for reasons that are personal and not just pure “evil.”  For the first time ever we get to meet one of our regular players at a different period in history.  We get a real look at the culture and the family dynamics at play in Agent Christopher's life.  Denise Christopher is at a crossroads in her life – and we struggle with Lucy and Jiya as they debate about how much to tell her about history and their true purpose.
There's also the extremely interesting stress behind the idea that if Lucy and team fail on this mission - the present day timeline will just cease to exist!  The team would never have been put together and Christopher's whole family would just never be!  That's a lot to wrap your head around!?!
And, if you are a true TIMELESS fan, I’m sure you had the same experience I had, when Agent Christopher presents Lucy with the flashdrive she was given almost 40 years before!  That moment gave me chills on the page and also the first time I saw it in a rough cut from the editing room.  What a great callback to season 1, and what a way to play with the conventions of time travel.
Remember – even though we make the show, we are fans too!  We have the experience of watching the story take shape too ... just in slow motion.  You guys watch it in a continuous 42 minute experience – for us, the filmmakers,  the process takes somewhere from weeks to months (depending on what point in the process we each jump on).

Director Alex Kalymnios was new to the show.  She had been highly recommended by another producer-director to Shawn Ryan's team.  When I don't know a director I make a few phone calls to vet them and make sure to watch at least one of their projects.  Alex chacked out great.  The episode of her's I watched was THE 100.
I chose THE 100 because it was a show I’m familiar with.  Our cinematographer Nate Goodman shot the pilot, and I’ve seen a few episodes over the years. This just means I know what an episode should be.  When I watch an episode of TV as a sample, my goal is to see if it’s a great example of what the show aspires to be.  Ideally I want it to represent the series well and to also elevate and/or add something unexpected that is consistent with the tone of the show.  Alex’s episode did this.  It was very contained with much of it taking place in one space, yet with a big cast and lots of extras.  These elements could trap many directors… but she handled it all very well.  She moved the camera a lot and kept the tensions alive… and all of the storylines were very  clear. (Clarity may be the one thing I look for beyond anything else!)
Anway – as I often say - one of my biggest jobs is to work hand-in-hand with the directors familiarizing them with the show and all of its ins and outs, advantages and pitfalls.  Working with Alex was a joy.  It’s hard to find the perfect word to describe someone, but with Alex I’d pick “delightful.”  She’s been directing awhile already, but, to me, she’s still early on in what I’m sure will be a long and successful career.  What was fun about her was her enthusiasm and her joy at filmmaking.  She's also British and this was her first experience shooting in Los Angeles, and not just LA but on the Paramount Lot!  This is a thrill for even grizzled old vets.. It never gets old.  But she was legit pumped up to be on the show and in Los Angeles and on this classic lot.  Watching the show I think she really controlled the internal rhythms of the story both emotionally and dramatically. 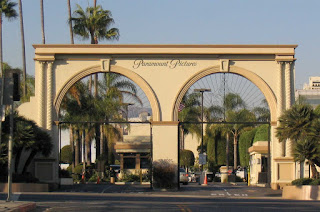 I felt a little bad, because (as sometimes happen) we spent a lot of the prep of this episode beating the script down and getting it in shape to produce.
I know this story feels relatively simple and contained by our standards, and the 80’s looks like an easier period to produce than some of the others we do.  I think what made this one hard is just that there were so many stories at play that, in the early drafts of the script, there were just too many scenes and settings and beats of story to contain in the number of days that are prescribed by our budget.
It’s always something with TIMELESS, the last episode was challenged by 100’s of extras in period wardrobe in 1911 NYC.  The episode before was challenged by music playback and a lot of action.  This one was challenged by “how do we tell all of this story in the time and budget we have?" This includes screen-time by the way.  Faye Brenner, our script supervisor timed the early drafts as being very long.
The problem we all had was that the script was so good that none of us really wanted to cut anything.  But we ended up in meeting after meeting, day after day, trying to figure out how to compress stories into fewer scenes and less locations.  Some of this becomes bizarrely mathematical – it’s like, if the Assistant Director and Director and Producers assess that “these three scenes with these six characters in these three locations will take ten hours to shoot” so, we propose – “What if we take one character out and cut one of the scenes and move the same information and some of the page count to two locations?  How long will that take?”  Then the production team retreats for an hour or two and assesses and comes back with something like “Well, we lose the one-hour location move, but the one scene becomes longer and more complicated – so ten hours can be reduced to seven hours” Then we factor that in and start again…  Rinse and repeat.  Really, we spent way too long doing that kind of stuff on this one.
I felt bad because Alex wasn’t getting the time to do her thinking, and Arika and Lauren were being very patient, revising and revising their plan…
But you know what?  (And I find this is often the case) When you start with a script that works – you can go after a lot of detail, and as long as you don’t lose anything essential – it will always work!  Now that’s it finished, I don’t see or even remember the compromises that were made.
One of simplification that we came up with (Lauren came up with it actually) which made the episode better (IMHO) is this...  In first drafts we revisited the attempt on Reagan's life twice.  The story origionally opened following John Hinckley and we saw the attempt on Reagan's life as it happened historically.  Then, when the time team arrived, we saw it again but with the changes that occurred by the fact of our heroes being there.  This is a frequent convention of our series which began with the pilot.  We show a scene as it occurred and then again as we change it.The problem was, staging this scene twice just wasn't feasible.  It would have taken a good portion of two days.  The solution came to us finally.  There was a scene in Hinckley's hotel room, when Lucy, Young Christopher and Jiya entered and snooped around. The fix was to not open with the attempted assassination but, instead, to open with an impressionistic montage in the hotel room of Hinckley writing letters to Jodi Foster.  We all, and Alex especially, quickly got excited by this.  While much easier to produce it's actually an eerier way to start the show.
Finally, I'd like to talk about the physical production of the assassination attempt, and tip my hat to First AD Max day and Script Supervisor Faye Brenner.  Max and his AD team studied video of the attempt on Reagan's life over and over, and they sat with our extras casting and wardrobe team and watched the video again with them.  Suffice it to say, the whole scene is very accurate with as many details as possible just right.  It's one thing to do this on a feature film, with a nice slow pace that accommodates detailed precision - but when you're working fast like we have to it's much harder.  Max and team staged it great and Faye mad ensure that shot to shot the continuity was just right.